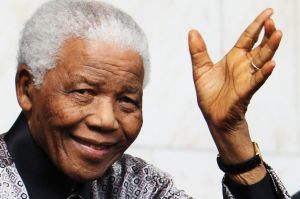 Nelson Mandela: a man whose life left everyone pondering, wondering, being grateful, and asking ourselves the simple question of how do we continue to live up to those principles that he so powerfully stood for. When such an influential leader passes on from the existence that we know, the impermanence of life becomes real. Within minutes of the news, people were stopping and examining their own lives. The integrity of his speech and his actions changed this world. He embodies the kind, compassionate, loving human characteristics that exist within each one of us. How do we know that his character is one that represents us all? Because people of every demographic can relate. Because it’s people like Nelson Mandela that understood what it really meant to tap into the universality of what has us connect, contribute, and shine in the light of the adversities we face. It’s people like Nelson Mandela that remind us that even the very people who cause us suffering are worth forgiving, treating with non-violence, and sticking to what we believe in so that we can bring greater connection and change to this world. The forgiveness and non-violence isn’t about the other person, it’s about our own sense of freedom and clarity in practicing what we preach and experiencing the benefits of it through a sense of empowerment.

Students fight teachers over having to attend an unwarranted detention and by doing so, they lose the power of their voices. Parents fight against their children’s healthy questioning by imposing their opinions through punishment and by doing so, they lose the opportunity of simply modeling the very respect for which they are arguing. Politicians, prison guards, school administrators, corporate managers, employees, civil servants, house mates, siblings, entertainers, refugees, citizens, spiritual leaders,… we all play various roles in this world. Our identities, our roles, and the way we interact in the environments in which we live is a direct reflection of how we perceive ourselves to have the freedom of being who we are and having our voices heard. Our systems are systems of power and influence. I am not sure that many of us would have been willing to stay true to our words through 27 years of imprisonment. Not because we wouldn’t have wanted to, but because that would have been one of the most difficult of unjust circumstances for the human mind to stay true to a perspective of courage, optimism, and belief in the possibility of equality and freedom.

Here is to celebrating and being thankful for the impact of Nelson Mandela’s life and the sacrifices he endured while being true to what we all are capable of: integrity, wisdom, and true kindness toward ourselves and others.

Every moment of every day presents us with opportunities to practice being present, speaking truth, listening, letting go, grounding, observing, paying attention to what is and what isn’t happening inside and all around us.

I am interested in all the beautiful complexities that make a person whole. I can only offer what I know. The rest I still have to learn.